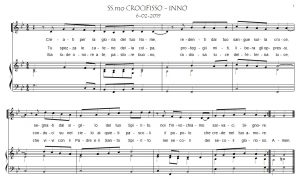 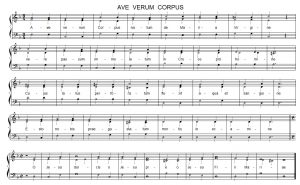 A thanks for the translation of these pages in the Polish: Friend polish

A thanks for the translation of these pages in the hungarian: BÁLINT TIBOR (Szeged H)

A thanks for the translation of these pages in the French: ARNALDO DE CASTRIS and Sr. ANAÏG MEREL (Nantes F)

A thanks for the translation of these pages in the English: SHEILA COLEMAN in MORGANTE (GB)

The Abbey church of Saint Mary Major in Ferentino is dedicated to the Assumption of the Holy Virgin, and is one of the best known in Latium. It is one of the first churches built in the Gothic-Cistercian style in Italy and also the one in the best state of preservation. This church was built on the ruins of the original church of the 4th century and on those of another one of the 9th century. These latter which were considered the cathedral until 1108.

No written documents exist which prove the final construction date of the present church because they were all lost or destroyed. We do know, though, that it was finished at least by 1150. We say this because in that year the Pontiff Eugene III in this “city, in the church of Saint Mary Major, consecrated many Bishops.” This declaration was found in a document of the episcopal archives of Ferentino and is supported by the ‘Chronicles of Fossanova.’

Building was begun by the Cistercian Monks of the Abbey founded in Ferentino by St. Bernard of Clairvaux and by Pope Innocent II about the year 1137.

The church is built entirely of travertine (porous marble), a stone found in great quantities in this area. Only the octagonal bell tower was left incomplete. In the early 13th century the austere lines of the original facade were softened by more decorative side doors, the rose window and a marble main entrance.

The North side faces the local hospital, which was built on the site where once stood the principal complex of the Abbey. This was separated from the church by a small cloister, traces of which still remain on the exterior of the wall face of the north nave.

The side that faces East is of extraordinary beauty in its simplicity and austerity.

N. B.: in the upper part, a fine rose window with eight lozenges; in the middle, an elegant mullioned window; below, directly to the left, a wall of massive stone blocks and a small but solid door, now bricked in: an important remnant of the 9th century Church.

This wall is remarkable for the its solid buttresses which give stability to the building that here reveals an impressive height in comparison with its width.

The apex is surmounted by a tall narrow mullioned bell-tower; on the wall face, there is another stained glass rose window. Lower level, on the ground floor there is a large vault like room that sustains a chapel separated from the rest of the church. In ancient days, a balcony opened out over the square, from which the bishop would give his blessing.

In the church basement you can see a construction in polygonal pelasgic style, called ‘ierone’: fortress in time of battle and place of worship in time of peace.

On this foundation stand the pillars on the right hand side of the church.

This faces towards the West. It is rectangular in shape, with the central nave rising above the others and ending in a gable. It is impressive in its form and ornamentation, entirely covered with hand chiselled travertine.

Lower part: here we have three doors. Those on either side both have a semi-circular arch above them; each also has a small stained glass window (Nord – Sud).

On the upper part, above the window can be seen a bas-relief of Christ the Saviour, adorned with a crosshaped halo, a book in the left hand and with the right hand giving a blessing; this sculpture was part of the original church. Centre, a finely worked rose-window with marble spokes and circular intersecting arcs.

The central door has a Gothic arch; above it there is an attic with 5 square panels, containing large circular medallions: in the centre one is sculptured theEaster Lamb, the others show the symbols that represent the four Evangelists ( 1 – 2 – 3 – 4 ). The columns which support the vault and the attic above the centre door rest on the backs of two crouching lions. (Note the ‘cipollin’ marble used for the columns.)

For the construction of the central door, marble from the ruined ancient Roman theatre, built in the 2nd century A. D. was used.

On the left door you can see heads which serve as caryatids; one is of Emperor Frederick II, benefactor of the order, the other is unidentified (perhaps his mother Constance?).

TOMB-STONE OF S. AMBROSE
Below, between the central and left door you can see a ‘precious’ stone, with the writing:

The floor plan is rectangular, but the upper part of the altar end is cruciform. It has three naves, divided by pillars and braided columns. The naves receive light from a single splayed mullioned windows. At the centre of the transept, over the vault, rises an octagonal bell tower two floors high (towervisible from outside). Behind the altar the vanes of themullioned window and a large stained glass window bathe the temple with eastern light.

Out of respect for the wishes of St. Bernard the temple is simple and austere, bereft of useless ornaments.

N. B.: to the left of the main door is a fresco, called‘Mary full of Grace’: a priceless work of the 13th century;

the characteristic asymmetry of the stained glass windows, and the capitals, one of which (the one which face the altar from the chapel towards the sacristy) has the leaves curling inwards;

the two stone holy water fonts: on the left shoulder of the kneeling statue is a fleur de Iys, emblem of Ferentino, and there is written on it ‘V PESA’ (Oh! How heavy it is!).

the main altar is modern;  above the main door, an oil painting on canvas representing the Assumption, dated 1801, done by a native of Ferentino, one Desiderio De Angelis; – the windows and the doors are also new ( 1970).

During restoration work, carried out between 1951 and 1955, below the present-day altar, a stone tablet was found giving proof of the existence there of a ‘Domus Ecclesia’ in the dwelling of Valerio Gaio; a house which was destroyed during the persecution by Diocleziano (303 A.D. – 304 A.D.), for the sole reason that it was a place where the Christian cult was practised.

During further restoration work (1978-1984) there was brought to light a Roman cistern on which rests the foundation of the column to the left of the altar steps.

This wall is remarkable for the its solid buttresses which give stability to the building that here reveals an impressive height in comparison with its width.

END_OF_DOCUMENT_TOKEN_TO_BE_REPLACED 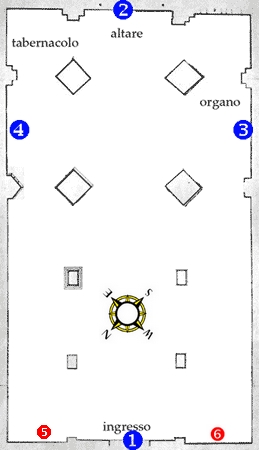 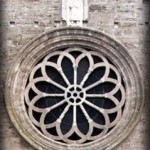 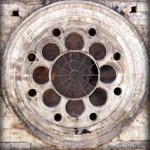 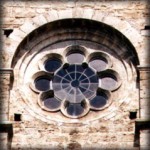 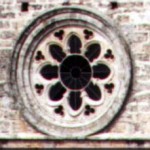 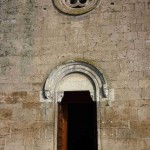 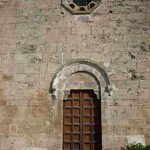